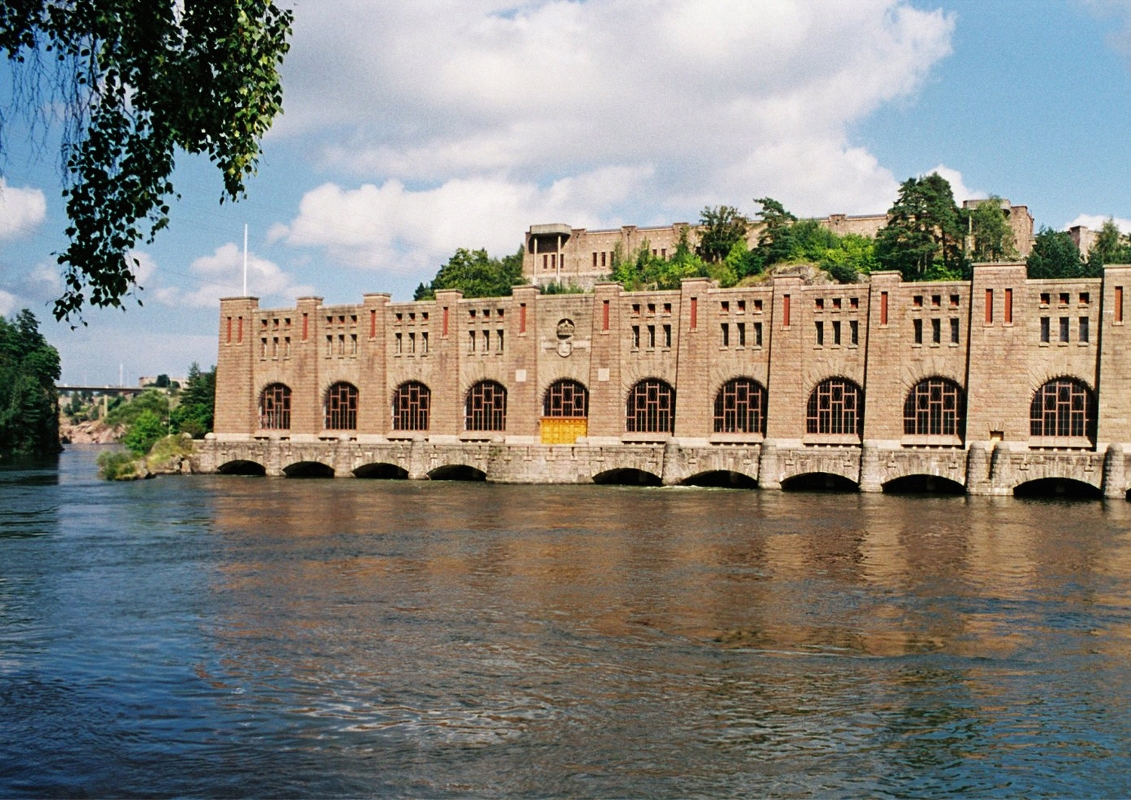 Olidan power station on the Göta Älv River, is located in Trollhättan Municipality. It was the first large-scale attempt at generating electricity from water in Sweden. In 1910, Olidan began to supply power for industry and the railway. That signalled the start of the development of Sweden’s rivers. The construction of Olidan led to the founding of Kungliga Vattenfallsstyrelsen (the Royal Vattenfall Board), which later became Vattenfall.

History – the cradle of Vattenfall

Olidan Power Station was the Swedish state’s first hydro power project. The state had been working on plans to build power plants on large rivers for a long time. However, there were some concerns that there would not be a need for all the electricity generated. In 1905 the government purchased the company Nya Trollhätte Kanalbolag (Trollhättan Canal Co.) which was converted into a state enterprise. In 1909 the company was transformed again and renamed Kungliga Vattenfallsstyrelsen.

Olidan has been called the first Swedish national hydro power station. The units were five times larger than existing ones in Sweden at that time and the machinery building was very impressive – constructed in red, roughly hewn Swedish granite. Kungliga Vattenfallsstyrelsen’s own employees built the facility and it had its own engineers, architects and artists. The architect of Olidan Power Station and of the Älvkarleby facility was Erik Josephson. He designed Olidan Power Station to look like a castle, and an upper balcony was added to give Maj Vilhelm Hansen, head of the Trollhättan Canal Co., and King Gustaf V a good view of the inauguration ceremony.

While the first four turbines were commissioned in 1910, construction continued and another four were put into operation by 1914. Due to increasing demand, as well as increasing capacity because of the regulation of the Göta Älv River, another five were subsequently built. By 1921, Olidan had a total of 13 turbines and 10 of these are still functioning, while the other three were dismantled for parts. However, it is currently rare for more than three to be generating power at the same time. Each turbine has a capacity of 10 MW.

Characteristics of the Göta Älv River

The Göta Älv River, where Olidan is situated, originates in Lake Vänern, Sweden’s largest lake. Stretching from Lake Vänern to Gothenburg’s harbour and out into the Kattegatt part of the sea, the Göta Älv River carries the greatest volume of water of any river in Sweden and its 44-metre head (drop) is mainly concentrated in the river’s upper stretch at Vargön, Trollhättan and Lilla Edet. For centuries, the Göta Älv River has been a major transport route, particularly since the construction of the Göta Canal.

Vattenfall is the sole owner and operator of the four hydro power stations on the Göta Älv River: Vargön, Hojum, Olidan and Lilla Edet. The most recently built power station is Hojum, which was completed in 1941, and the first one was Olidan, completed in 1910.

Olidan has a total of 13 units, of which 10 supply electricity. For many years, tourists have come to the case and lock area in Trollhättan to experience the raw force of nature that exists in the hydro power station. The visitors’ centre has become more and more popular each year. Fallens Dagar (Falls' Days) is organised in July every year. The release of water at the power station is a magnificent spectacle. About 120,000 people visit Trollhättan each summer during Falls' Days.